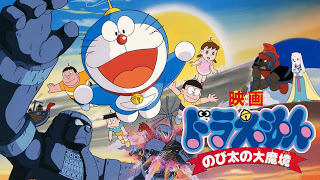 One day, Nobita was stuck in the school again, his teacher not letting him to go (He hadn’t completed his homework). While his teacher had allowed him to go, Nobita rushed to his house, fearing that his mother would scold him. On his way, he found a dog, dirty and hungry after fighting with a dog previous night. Nobita wanted to help it, but he couldn’t. When his mom sent him to bring some things from the market, he had gone there, and while he returned, he spotted the dog again, and Nobita gave him a sausage that he had brought from the market. The dog tried to follow him, but Nobita chased the dog away, fearing his mother will scold him because of her dislike of pets. But when Nobita’s mom lost her purse, the dog helped her in finding her purse. To repay the dog’s help, she agrees to keep the dog as a pet. After Nobita and Doraemon cleaned the dog, they named him Peko.
Soon, Nobita wanted some adventure, and asks Doraemon for that. Doraemon launched a rocket to find unexplored areas in the planet by taking satellite pictures, mainly from Africa. They have left searching for it, knowing that it would be very difficult to handle too many pictures. However, Peko tinkered with the device while Nobita and Doraemon is away, and found a mysterious giant statue somewhere in Africa. Excited that they might have found something no one has discovered, Nobita, Doraemon, and all of their friends including Shizuka, Gian, and Suneo planned to go to an expedition to find the statue.
After the first day of the expedition, Gian got annoyed by the group’s over reliance to Doraemon’s gadgets (including Shizuka using the Anywhere Door to go home to use the restroom) and angrily went off. At night, however, he was visited by the mysterious statue at his bedroom, who tells him about hidden treasure before disappearing. Interested, Gian rejoins the group the next day, but tells Doraemon to leave any gadgets that they use the day before. When they are cruising on a river with a ship, Gian forgot to steer it when he was throwing coconuts at crocodiles, causing the ship to crash. With the Anywhere Door burned by people mistakenly thought it was garbage, the group was almost swarmed by crocodiles, but they got rescued by a group of natives, who takes them to the village. The natives knows about the mysterious statue, and told Doraemon that they have to go through a lion infested savanna and a very deep gorge.
When the group reached the savanna, the mysterious statue appears again and drives the lions off. When they safely reached the bottom of the deep gorge and figured out the superstitions surrounding it, Peko, now fully trusting the group, reveals himself to be a prince of a kingdom of bipedal dogs with human intelligence . He told them that the evil minister Daburanda and his lackey Dr. Kos was planning to conquer the world, assassinates the king, and accidentally throws Peko, who’s trapped in a coffin, into the underground river in the gorge, causing him to meet Nobita. Doraemon and his friends decided to help him. First they searched for Burusasu, one of Peko’s loyal bodyguards, but found out he’s arrested by Daburanda’s soldiers. After helping a young puppy named Chippo, they free Burusasu from a prison, but Daburanda and his army commander, Saberu, realizes that Peko is back, and began a search for him and Doraemon’s group. Daburanda also reveals that he has princess Spiana captive in his palace.
While everyone is hiding from Daburanda’s soldiers, Burusasu said there was a saying that, “When the world will be covered by darkness, 10 travelers will come and move the statue’s heart to save the palace.”. Doraemon think the travelers are him, Nobita, Shizuka, Gian, and Suneo, but realizes there’s only five of them. When Chippo is hungry, Doraemon uses the Anticipating Promise Machine to make everyone feel full, but they have to fulfill the promise the next day.
The next night, the group went to the statue, but were ambushed by Daburanda’s soldiers. Burusasu faces the soldiers and lets Peko pass, but soon they got cornered by Dr. Kos and his aerial fleet. Peko was willing to hold the army back while the group escape, but Gian followed him, and soon the entire group does. Finally they decided to get to the statue together, which is guarded by Daburanda, Saberu, and an army. When Nobita wonders about the old saying of ten travelers, Shizuka uses the Anticipating Promise Machine for help. Suddenly, a second group of Doraemon, Nobita, Shizuka, Gian, and Suneo appears, fully equipped with weapon gadgets, and fights Daburanda and his army while the main group enters the statue, followed by Saberu. When Nobita lags behind, Saberu catches up to him. Despite given the Denkomaru sword, Nobita takes a long time to defeat Saberu. The group fighting the army is also forced to retreat when Dr. Kos arrives.
Eventually, Peko and the rest of the group manages to reach the statue’s heart, which is a mechanism to bring the statue ‘alive’ like a robot. Using it, Dr. Kos and the army was defeated, and Daburanda flees to the palace. He tried to bring princess Spiana with him, but Peko, using the statue, arrives in time and rescues her. Peko soon became the rightful ruler of the kingdom, and the other Doraemon gives the original Doraemon a new Anywhere Door to go home.
When the group came back home, they realized that they still have to fulfill one last the promise made from the Anticipating Promise Machine. The episode ends when Nobita leads everyone to the Time Machine to go back in time and help their past selves fight Daburanda’s army and enter the statue.