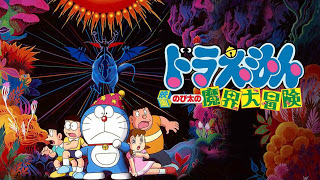 Nobita requests Doraemon to give him the Moshimo-box and wishes for the world to become a place where the use of magic is possible. Witchcraft replaces science and technology and everyone makes use of it on their daily lives, except for Nobita, who, like usual, isn’t very good at conjuring spells. Being frustrated, he plans on returning things to their past state, but his mother threw the Moshimo-box away.
One day, Doraemon and his friends meet Professor Mangetsu (満月先生), who studies magic and magical beings such as goblins, and his daughter Miyoko (美夜子), and are warned of the dangerous approximation of the “star of the Underworld” to the Earth’s orbit.
With the future of the planet at stake, the group must travel to the Underworld and pierce the heart of the terrible Underworld King with a silver dart, as detailed in the ancient texts of “The Chronicles of the Underworld”. Their attempts are, however, thwarted and Miyoko captured.
Doraemon and his friends then decided to use the Time Machine to return to the past and, using Dorami’s Moshimo-box, they manage to restore the Earth. The events on the Underworld continue, however, to take place in a Parallel Universe, where Miyoko is still captive. As a result, the group is once again forced to travel to the Underworld and defeat its tyrannical ruler once and for all.