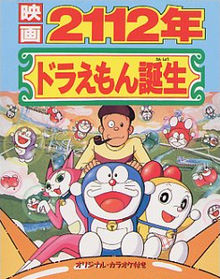 The date is September 3, 2112. Doraemon, a robot cat that initially had a yellow body with ears and a much higher-pitched voice, was manufactured at the Matsushiba Robot Factory. During Doraemon’s manufacturing process, two terrorists (the same antagonists from Doraemon: Nobita’s Dinosaur) were escaping from Time Patrol through a time warp, which caused an electrical power surge at the Robot Factory. While Doraemon was being assembled, the electrical surge zapped Doraemon and caused him to fall into the industrial garbage disposal. Luckily, Noramyako, a female robot dancer cat, saved him from the disposal furnace.
Doraemon returned to Robot School, training to become the best robot cat to serve people. However, due to his manufacturing defect caused by the electrical surge, he had problems in all of his classes. After a meeting with Principal Teraodai, principal of the Robot School, Doraemon was sent to a training class made for special robots. Here Doraemon met the robot cat Noramyako again. Two of his classmates, Jaibee and Kenta, which have personalities similar to Gian and Suneo, tried to snatch Doraemon’s pocket but Noramyako again saved him. Over time, Doraemon befriended Jaibee and Kenta, as well as other Doraemon-type robots (the Doraemons).
On the graduation day, all the robots had to give their presentations, including Doraemon. Because Doraemon is not good at tests, and the accident during his manufacturing process that made many of his features malfunctioned, his presentation was not successful. But, at the last second, he was accidentally selected by a baby named Sewashi.
As Sewashi grew up, he and Doraemon became best friends. One day when Sewashi was making a small clay figure of Doraemon, he ordered a robot mouse to eat the ears of the Doraemon sculpture, to make them look more like the ones in a 3-D rendition of Doraemon. But the mouse ended up eating the ears of the real Doraemon, which caused him to fear mice. At the hospital, the doctor robots accidentally removed Doraemon’s ears completely. When Noramyako saw this, she laughed at Doraemon, which made him sad.
As Doraemon sat on the top of a tower pondering over the loss of his ears, he tried to cheer himself up by drinking a cheer-up potion, but accidentally drank the sorrow potion instead. This caused him to weep uncontrollably, and made his skin color fade to blue and his voice permanently deep.
A few days later, Doraemon’s sister Dorami came and told him that Sewashi was missing while looking for him. To find Sewashi, Doraemon again called for the cheer-up potion but accidentally used speed-up potion, which caused him to move very quickly and uncontrollably.
At the river bank, Sewashi wondered where Doraemon has gone. In the same area, the two terrorists from earlier in the movie appeared, being chased by Time Patrol. They took Sewashi hostage and threatened to hurt him if they are followed. Doraemon appeared on the scene and jammed the exhaust pipe of the terrorists’ spaceship with his head, causing the spaceship to crash and the terrorists to be caught. Sewashi was saved but Doraemon lost his pocket during the rescue. When Dorami and Noramyako found Sewashi and Doraemon, Noramyako apologized to Doraemon for laughing at him earlier and commented on how she liked his new look and voice.
On Christmas, Sewashi gave Doraemon the clay figure that he was making, this time with no ears and painted blue to match Doraemon’s new look. As Doraemon, Sewashi, Dorami, Noramyako, and other robots celebrated Christmas together, Principal Teraodai (dressed as Santa) arrived with another pocket as a Christmas present and brought with him a new robot called Mini-Dora, based on Doraemon.
The movie ends with Doraemon traveling back in time on his time machine, saying that Sewashi sent him to the past to improve the life of Sewashi’s great-great-grandfather, Nobita Nobi. But when Doraemon gets out of the desk, it is revealed that the story was a dream from a mangaka in the late 1960’s, who was trying without success to find a good story. After hitting a doll, he remembers his dream and the main character who resembles the toy’s design, and starts designing an idea for a new manga: a stray cat-like robot from the future who helps a troubled kid with a multiuse pocket, thus revealing the origin of the Doraemon manga.