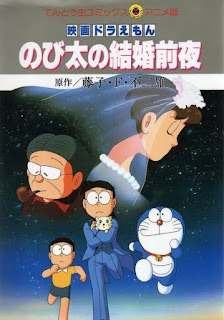 The film starts with Nobita helping an old woman to cross a busy road. Being pleased with his conduct, she says that Nobita will be a good bridegroom in the future. While returning home, he sees Dekisugi expressing his love to Shizuka which makes Nobita cry (even though it was a rehearsal for a play in Nobita’s school—Nobita thought that it could influence Shizuka to marry Dekisugi). He goes to Doraemon, asking him to take him to the future to see if he and Shizuka will marry. Nobita and Doraemon travel to the future. When they arrive, they find out that they have arrived on the day before the wedding.
Future Nobita goes to a hotel and is told that his marriage would be held the next day. Nobita and Shizuka go for a walk but find a lost cat and decide to return it to its owner. But when they arrive near the house, they find out that the owner of the cat is going to fly to America. Nobita and Shizuka then decide to deliver the cat to the airport. When they are on their way to the airport, they find Gian and Suneo who give them a lift to the airport. But as they are about to reach the airport, their car runs out of fuel. Nobita and Shizuka run to the airport but find out that the plane had left. Luckily they learn that the cat owner’s plane was assigned to a different gate and return the cat to the owner. They go back to the car and Gian invites Nobita to his bachelor party. He goes to the party and after returning he remembers Doraemon and his childhood. All the time he is being followed by Nobita (as a child) and Doraemon.
Shizuka’s mom advises Shizuka to go to sleep in preparation of the big day. At the end of the story, Shizuka’s father has a long talk with future Shizuka over her choice of marrying Nobita. Shizuka’s father remembers her childhood days and gives his support for her decision. The film ends with Nobita marrying Shizuka.