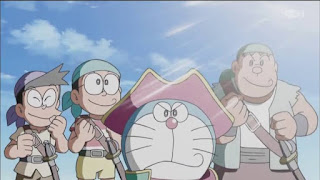 Believing that there are good pirates in the Caribbean Sea, Shizuka and Dorami time-travel to the end of the 16th century and rescue a dashing pirate named Kenneth. Meanwhile, Doraemon and Nobita, under the mistaken assumption that Dorami and Shizuka are abducted by Kenneth’s henchmen, proceed to save the girls with Gian and Suneo and joins forces with an evil pirate named Captain Johnny, who is the enemy of Kenneth.